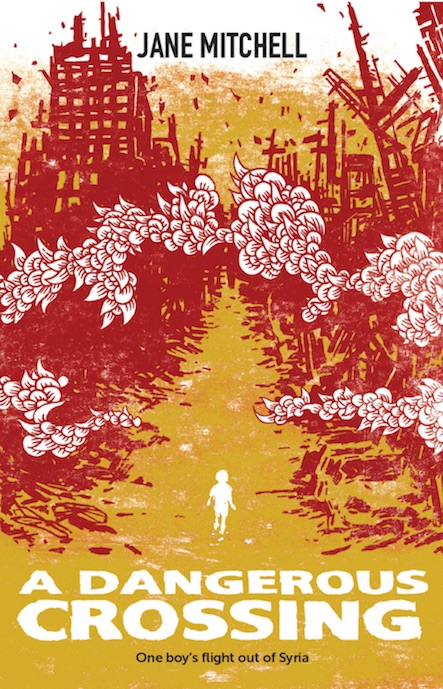 Ghalib doesn’t want to leave his home in Syria. But the city has become too dangerous, and his family has no choice but to flee. Together they make their way through Syria to the Turkish border, where Ghalib gets separated from his family. Stricken with grief and fear, fighting cold, pain and hunger, he manages to make it to a refugee camp in Turkey. Ghalib is safe for now, but life in a refugee camp is wretched and hopeless, and this boy’s journey in search of safety is far from over. Based on true accounts and real Syrian children, A Dangerous Crossing is the story of one boy’s search for refuge.

About the author: Jane Mitchell has written several books for children and young people. Her first novel, When Stars Stop Spinning, was Bisto Book of the Year, and her more recent Chalkline won not only a CBI Merit award but also the Children’s Choice award. She works in disability provision in Ireland and travels widely, including recently to the refugee camp in Calais.

‘I now understand the Syrian refugee crisis like never before. I walked in young Ghalib’s fresh white runners from the refugee camp, I was thrown back by the bomb blast that hit his town, I wept his tears, felt his frustration and anger. There’s nothing like a great novel to make the world come alive. An important book, a necessary book, but above all, a brilliantly told story.’ – Sarah Webb, author and children’s books commentator

‘Jane Mitchell’s treatment of this topical and serious issue is sensitive and well-researched, drawing from true accounts and paying tribute to real Syrian children who have tragically been victims of the war. The result is a captivating, beautifully written book celebrating the bonds of family and friendship formed and strengthened by terrible circumstances.’ – Scottish Book Trust

‘What makes A Dangerous Crossing such a powerful experience is the way in which it explores the plight of many, through the unique story of one family… By tracing the routes of many refugees, and hearing their stories, Mitchell creates a real sense of place. This produces not only a fascinating insight on Syrian refugees endorsed by Amnesty international, but also a darn good (and dare one say entertaining) adventure story.’ – Emily Elphinstone, Nomoreworkhorse

‘A Dangerous Crossing is an absolute triumph. Beautifully written from the heart & a poignant story. Highly recommend.’ – Elizabeth Rose Murray, author of the Book of Learning trilogy

‘We need to have empathy during this crisis and understand where and what these people are escaping from. Jane Mitchell has crafted not only a beautiful book, but a sort of manifesto for young people about the refugee crisis, to fully understand the extent of what’s occurring. It is my hope that it gets the media coverage and readership that it deserves for more reasons than I have paper to list them on. It is extremely timely and densely political, but beautiful nonetheless.’ – A teen reviewer on Gobblefunked

‘A timely and stark insight into the plight of Syrian refugees … In spite of the tragic circumstances that propel the narrative, the story has an ultimately hopeful and redemptive quality … a compelling story.’ – Inis, the magazine of Children’s Books Ireland

‘A bold, tense, gripping story of refugees fleeing the chaotic and terrifying Syrian civil war.  This really is an extraordinary piece of writing that captures the hardship, hope, despair and total uncertainty of giving up everything, taking nothing and stepping into an utterly frightening and bewildering unknown.  The writing is layered with passion, compassion and love and will leave you breathless at the end.  A heart-racing read.’ – Jeju Librarian

‘This tense and gripping novel is layered with compassion, insight and psychological authenticity in its powerful evocation of the chaos of the Syrian civil war. Ghalib doesn’t want to leave his home but he and his family have no choice but to flee. Based on the experiences of real Syrian families, Jane Mitchell has crafted a deeply empathetic exploration of the plight of refugees and the intense challenges posed by embarking into the bewildering unknown.’ – Judges for the Children’s Books Ireland Awards