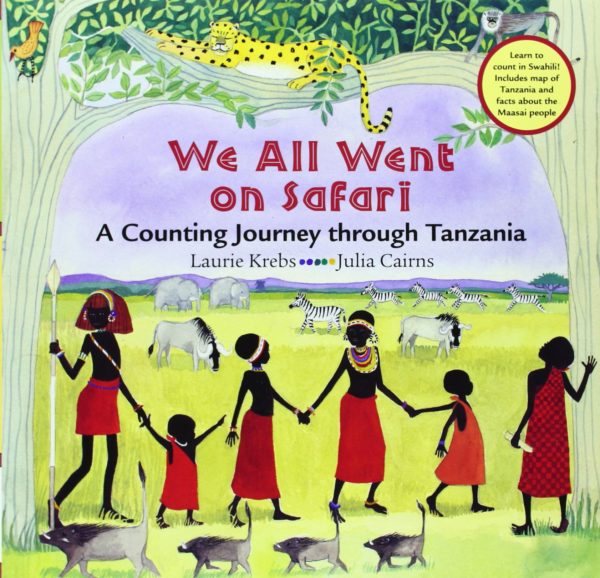 Join Arusha, Mosi, Tumpe and their Maasai friends as they set out on a counting journey through the grasslands of Tanzania. Along the way, the children encounter all sorts of animals including elephants, lions and monkeys, while counting from one to ten in both English and Swahili. The lively, rhyming text is accompanied by an illustrated guide to counting in Swahili, a map, notes about each of the animals, and interesting facts about Tanzania and the Maasai people.

“Truly fabulous illustrations…It is important for our kids to learn that differences should be celebrated” – Paml L.

“Each sharply detailed scene glows with jewel-like color, set off by the traditionally dressed human figures’ heads and limbs. Further information about the Maasai, Tanzania, the ten children’s Swahili names, and the equal number of wild creatures met along the way close this brilliant, horizon-expanding outing.” – Kirkus Review

Laurie Krebs, an infant school teacher for twenty years, is drawn to projects that combine her love of children’s literature with her love of travelling to distant places. After a visit to Africa, Laurie wrote the original version of We All Went on Safari as a way of introducing the world of Tanzania to her students and grandchildren. Laurie has written many books for Barefoot, which have received the highest critical acclaim. She has four children and five grandsons, and lives in Virginia, USA with her husband, Bill. Anne Wilson has an MA in Illustration from St. Martin’s College of Art, London. She has been illustrating children’s books for several years, and this is her first project with Barefoot Books. She gains much of her inspiration and use of colour from her travels. Anne lives in Reading, England and has two children.