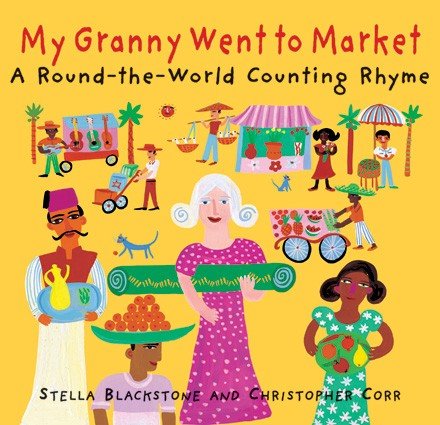 Fly away with Granny and count with her from one to ten as she spins around the world on an unforgettable shopping trip. This colourful, rhyming story is followed by a counting page for reinforced learning.

‘A beautifully illustrated book, full of detail and colour… Not only is this a counting and rhyming book, it also provides some clear explanations as to unfamiliar terms covered within the text. The illustrations reveal traditional dress and environments including Australia and Switzerland… An entertaining story, while revealing a captivating illustration on each page of the very finest quality.’ —Nursery Education (selected as a ‘Top Read’)

Stella Blackstone has written many best-selling titles for Barefoot Books, including the popular Bear and Cleo series and An Island In the Sun (2002). Her stories have been translated into a number of languages. Stella lives in Somerset with her three children, two dogs and two cats.

Christopher Corr was born in London and studied at The Royal College of Art. His round-the-world travels have provided much inspiration for his work, and his first trip to India in 1986 resulted in a one person show entitled ‘Wel-come To India’ which was followed by a book and a short BBC TV film of the same name.