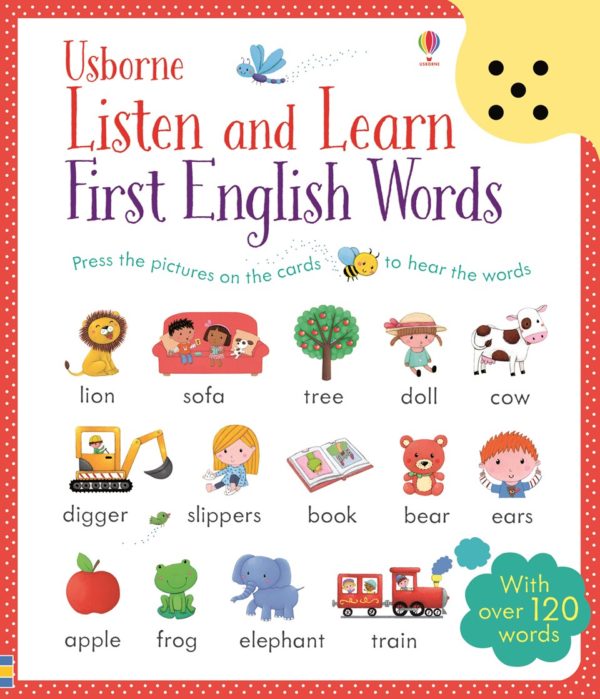 A fun and interactive way for children to learn and listen to over 120 everyday English words spoken by a native speaker. Children will love selecting a card with illustrations of a topic such as clothes, food, or animals, slotting it into the book’s special frame and pressing an illustration to hear the word read aloud. Simply take one of the double sided cards out of the envelope and slot it in. Press ‘go’ and then press each of the pictures to hear how the word is pronounced. For preschool children learning English as either a first or second language.

Hardback with sound panel and cards

About the author: Sam Taplin has been in love with words for as long as he can remember. He started writing poetry at primary school, where Mrs Holloway warned him never to put a word in a poem just because it rhymed – advice he still tries to follow when wrestling with a new poem. After studying English literature at university he was full of long words and complicated sentences, but writing books for children has helped him to realise that you don’t need lots of words to say something properly – just the right ones. He’s written everything from a handbook for medieval knights to an encyclopedia of dinosaurs. He also works on poetry books, choosing poems for Usborne’s anthologies, which is so much fun that it feels strange getting paid to do it.

Sam wanted to write children’s books because they meant so much to him when he was growing up. So many of his childhood memories revolved around particular books – how exciting and magical they were, how they took him to far-off places, how they opened a door in his head and allowed him to think about the world in a new way. He liked the idea of helping to create books which might inspire children in the same way.

Sam finds it hard to single out any particular book that he is prouder of than the others. Lots of them have been a joy to work on, and what he likes is that he’s had the chance to write all sorts of different books – serious ones and funny ones, ones with lots of words and ones with hardly any words at all (which are the hardest to write), history books and poetry books and novelty books. The other thing he says is a pleasure is working with designers and illustrators who take the words and bring them to life on the page – it’s a thrill to be a part of that process and watch a book take shape.