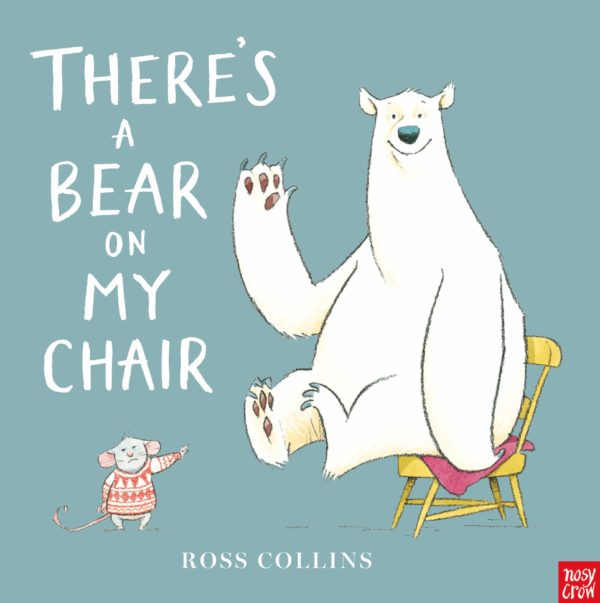 Poor Mouse! A bear has settled in his favourite chair and it just isn’t big enough for two. Mouse tries all kinds of tactics to move the pesky Bear but nothing works and poor Mouse gives up. Once Mouse has eventually gone, Bear gets up and walks home. But wait – is that a Mouse in Bear’s house?!

The recipient of the inaugural Amnesty CILIP Honour, There’s a Bear on My Chair is a JOYOUSLY illustrated picture book, with a clever single rhyme echoing Dr Seuss – it’s perfect for sharing.

Watch it read on Milkshake – Scroll to the video!

There’s a Bear on My Chair, written and illustrated by Ross Collins, was featured on Channel 5’s Milkshake.

Blessed at birth with fourteen fingers, a career in Illustration seemed obvious. Born and raised in Scotland, Ross studied Illustration at Glasgow School of Art and on graduating won the MacMillan Children’s Book Award for his first book The Sea Hole. His following book Supposing, was shortlisted for the Blue Peter Book Award and won the Scottish Arts Council Award. Ross now has over a hundred titles to his name including Busy Night, which won the White Raven Award, Alvie Eats Soup which gained an Oppenhiem Award, Billy Monster’s Daymare which won the Royal Mail Book Award and Dear Vampa which won the Scottish Children’s Book Award. Ross’ book The Elephantom was shortlisted for the Kate Greenaway Medal and has now been staged at London’s Royal National Theatre by the creative team behind ‘WarHorse’. Ross now divides his time between writing and illustrating children’s books and working on character development for animation houses such as Laika (Coraline) and Disney. In his private time Ross enjoys precariously swinging backwards on chairs.