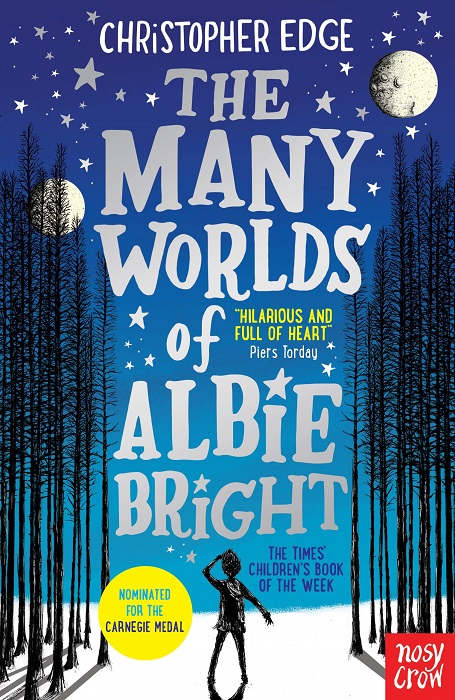 An extraordinary novel for anyone who’s ever been curious.

When Albie’s mum dies, it’s natural he should wonder where she’s gone. His parents are both scientists and they usually have all the answers. Dad mutters something about Albie’s mum being alive and with them in a parallel universe. So Albie finds a box, his mum’s computer and a rotting banana, and sends himself through time and space to find her…

‘Proves the theory that novels about science can be enormous fun. Give the man his own element on the periodic table of children’s authors.’ – The Times, Children’s Book of the Week

‘Moving, and exploding with scientific ideas and wonder.’ – The Herald

‘Edge offers an artful, touching exploration of grief. Albie’s first person narrative, inflected with references to science and classic sci-fi, will be especially appealing to middle-grade fans of the genre.’ – Booklist

‘Readers will be captivated by Albie’s adventures in parallel versions of his own life and intrigued by the science behind his travels. A fascinating take on bereavement and sorrow.’ – School Library Journal

‘A book with a big brain, big laughs and a big, big heart.’ – Frank Cottrell Boyce

‘Christopher Edge’s warmhearted writing sucks you in from the start with a sparkling take on parallel worlds, fuelled by a delightfully fresh understanding of quantum physics and a fearless ability to take on life, loss and dreaming big while never talking down to his readers. Bananas will never be the same again. I have one complaint about this book. I wanted it to be longer.’ – Samira Ahmed

Nominated for the 2017 CILIP Carnegie Medal.

Winner of the Brilliant Book Award.

Longlisted for the UKLA Book Awards 2017 and the Amazing Book Awards.