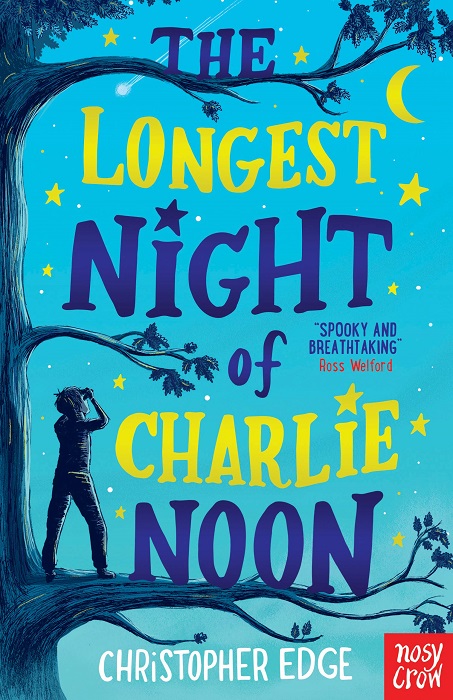 “If you go into the woods, Old Crony will get you.”

Secrets, spies or maybe even a monster… What lies in the heart of the wood? Charlie, Dizzy and Johnny are determined to discover the truth, but when night falls without warning they find themselves trapped in a nightmare. Lost in the woods, strange dangers and impossible puzzles lurk in the shadows. As time plays tricks, can Charlie solve this mystery and find a way out of the woods? But what if this night never ends…?

A timeless novel for anyone who’s ever felt lost. From the award-winning author of The Many Worlds of Albie Bright and The Infinite Lives of Maisie Day.

“A spooky and breathtaking adventure. Christopher Edge takes the reader on an unforgettable journey.” – Ross Welford, author of Time Travelling with a Hamster

“Rarely does an author have the courage to explain the metaphysics of time with crystal clarity in a book pitched at children as young as eight….You’ll scratch your head and need to read it all over again right away, but double science has never been so much fun.” – Alex O’Connell, The Times

“A heart-stopping adventure with thrills and twists, codes and puzzles, underpinned by an intense evocation of the natural world and an intriguing exploration of the concept of time.” – Nicolette Jones, The Sunday Times

“It isn’t every day that a novel for 8- to 12-year-olds reminds you of TS Eliot’s Four Quartets, Dante’s Inferno and Stanley Kubrick’s 2001: A Space Odyssey… Charlie’s story is also a rare thing, a novel that will be enjoyed by those who don t usually like fiction. Time will fly as they read it.” – Tony Bradman, The Guardian