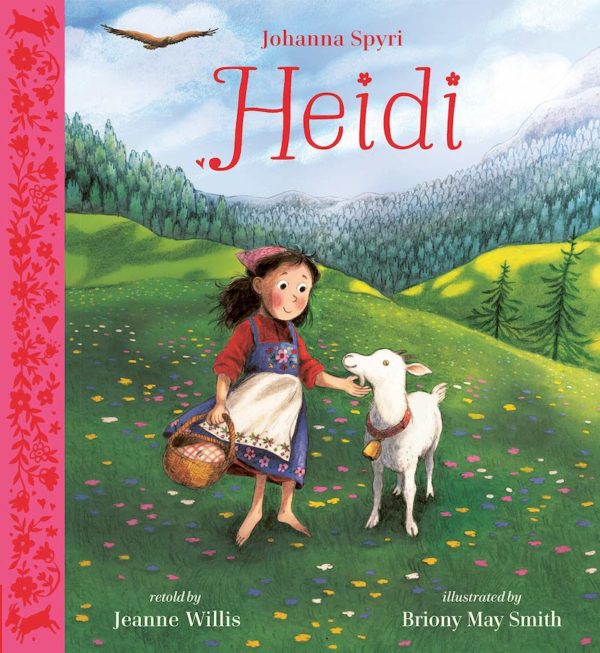 When five-year-old orphan Heidi is sent to live in the Swiss Alps with grumpy Grandpa, the rest of the village take pity on her. But Heidi soon discovers that her grandpa is gentle and kind behind his scowl, and she loves her new life running wild in the mountains with the goats, the flowers and her best friend Peter. That is, until Heidi is forced to move far away to the soot and smoke of Frankfurt to be the companion to an unwell girl. Will she ever return to her true home in the mountains?

Illustrated by: Briony May Smith

Jeanne Willis (Author) Jeanne Willis wrote her first book when she was five – a slim volume about cats written in pencil and stitched together with a painfully blunt needle so that it looked like a ‘real’ book. After that, there was no turning back. Having been fired from her Saturday job – selling cowboy boots on the Kings Road – for chewing gum, and after a brief career as a reptile vet’s assistant, she worked as a copywriter and had her first picture book published at the age of 21 (which she wrote whilst pretending to be busy creating adverts for cognac). She has since written over 300 books and has won several awards, which are arranged in the attic where she works, along with her collection of caterpillars, pink-toed tarantula skins and live locusts. Jeanne has a keen interest in Natural History and has lost count of the number of species featured in her books, including everything from slugs to sloths. She is currently into corvids – especially Nosy Crows.

Briony May Smith (Illustrator) Briony May Smith grew up in Sandhurst in Berkshire, playing in the garden with her younger brother and sister. She studied Illustration at Falmouth University and was Highly Commended for the Macmillan Children’s book prize in 2013 and 2014. She now lives in Devon, where her work day mainly consists of drawing fairies, interrupted only when her dog, Finbar, demands his walk. Briony’s work is inspired by fairy tales and folklore and life in the country.