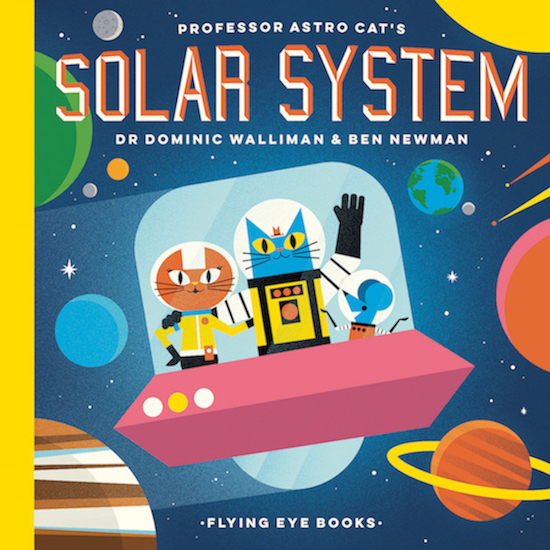 Professor Astro Cat and his friends are back for another galactic adventure in learning for young readers in this new addition to the bestselling series.

Welcome planet explorers! Did you know that Venus is covered in volcanoes? Have you ever wondered why Mars is red? Well, you’re in luck! Professor Astro Cat and the gang are about to set off on a journey around our solar system, so buckle up, join the tour, and get your learn on!

Dr Dominic Walliman has a PhD in Quantum Device Physics from Birmingham University as well as a Physics BSc and an MSc in Computer Science, and spends most of his time programming quantum computers. He lives in Canada. Ben Newman is an award winning illustrator who has racked up an impressive list of clients including Penguin, the BBC, and the New York Times, amongst many others.

Ben Newman has developed a distinct aesthetic over the years; a contemporary fusion of bold shapes, bright colours and playful characters which has been described as ‘bauhaus fuzzy felt.’ He has produced work for a large range of clients, including the Tate Modern, New York Times, BBC Radio 4, Google and The New Yorker. His practice extends outside of commercial work into worldwide exhibitions, paintings and three dimensional collaborations. Nowadays, he spends the majority of his time collaborating on the Professor Astro Cat children’s books with his longtime friend and scientist, Dr Dominic Walliman, which are published by Flying Eye Books. Concurrent to working as a freelance illustrator, Newman lectures on illustration at various universities and conferences in the UK and Europe.