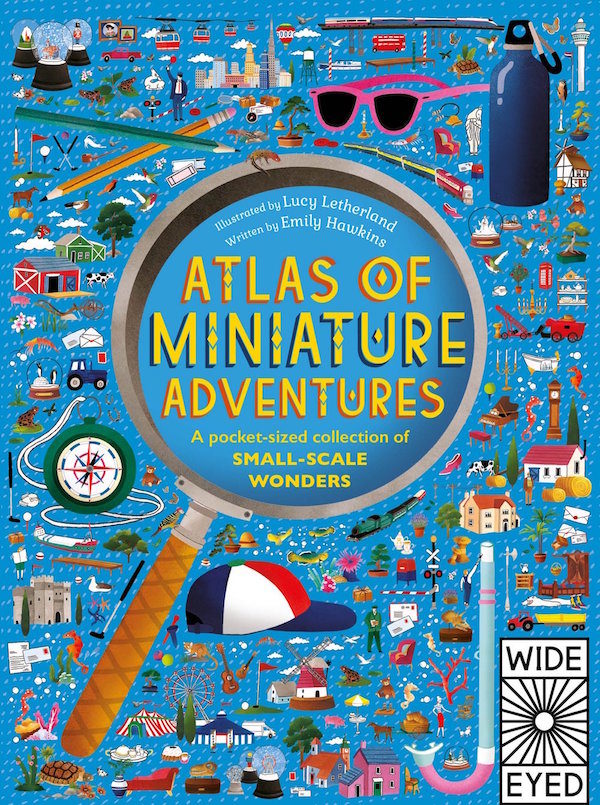 Discover the world’s smallest adventures with this beautifully illustrated journey around the world from the award-winning team behind Atlas of Adventures. Explore seven continent maps and learn about the best small-scale adventures on Earth – whether you’re taking a ride on the world’s largest miniature railway, sending a letter with the world’s smallest post office or cruising coral reefs with the smallest seahorse, this book brings together best miniature adventures from the four corners of the globe. Set off on your own mini adventure and see where it takes you!

Nearly 500,000 books from the ‘Atlas’ series sold around the world!

“A gorgeous book of maps that focuses on language and communication, with a tie-in app to help kids learn the basics of saying “hello” to anyone in the world.” – Buzzfeed

“An engrossing book that helps children put languages and peoples into their geographical context.” – Parents in Touch

“An invaluable tool for inquisitive minds” – The Book Sniffer

“An utterly fantastic idea from start to finish, and gorgeously presented as you’d expect from Wide Eyed Editions.” –  Read it Daddy

Emily Hawkins is a children’s author who loves making complicated things easy to understand. She has written books about all sorts of things, from cars, trains and ships to dinosaurs, magic tricks and mathematics. She co-wrote the Atlas of Animal Adventures (illustrated by Lucy Letherland), which won the Children’s Travel Book of the Year Award in 2016. Emily has also written several titles in the internationally popular Ology series, which has sold over 16 million copies worldwide. She holds a first-class English degree from Nottingham University, and lives in Winchester with her young family.

Lucy Letherland grew up in Baltimore and Howard County, Maryland. After studying at Syracuse University and California Institute of the Arts, he worked in feature animation and music videos. As a visual development artist, he’s worked for Dreamworks, Walt Disney Feature Animation, PDI Dreamworks, and he currently works for Laika. His first illustrated picture book was published in 2014. His current picture book projects are self-penned as well as illustrated; the first book will publish in 2016. Kenard lives in San Francisco with his wife and three cats.